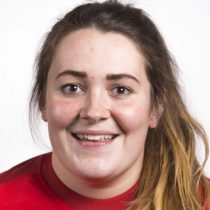 Cerys was part of the Wales Women's World Cup squad in France in 2014 but didn't gain any game time.

She was called in the Wales Women team for the 2017 Six Nations where she was aiming for a starting spot.

A further impressive performances saw her being named in the squad for the 2019 Six Nations.

After 25 caps for Wales Women, she was named in the squad to compete at the 2020 Women's Six Nations, where she is set to add to her 14 caps in the tournament.