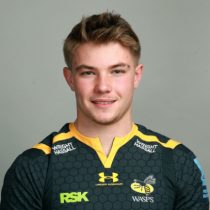 The fly-half joined the Wasps academy in February 2016. Rugby runs in the family with Dad Ian playing for Tynedale RFC, Northumberland and also having England U18 trials.

Atkinson made his Premiership debut for Wasps against Sale Sharks during the 2019/20 season. The Wasps Academy product extended his contract with the Club and was promoted to the first-team squad in May 2021.