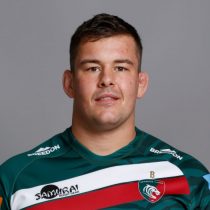 Charlie Clare joined the Saints for the start of the 2016/17 season having spent the last three seasons playing for Bedford Blues in the Championship.

During his time at Bedford, hooker Charlie impressed during his appearances for the club as they reached the Championship’s top four at the end of last season. It was whilst playing for the Blues that Charlie was selected in Martin Haag’s Championship XV that beat Canada in November 2014.

Prior to his three years at Bedford, Charlie was a member of the Leicester Tigers academy where he had loan spells with Nottingham, Jersey and Loughborough Students.

As a Bedford player, he earned selection in the Championship Team of the Year in 2014, then had a spell with Northampton Saints from 2016, before returning to the Blues.

He passed 100 appearances for Bedford before agreeing to join Tigers and made his club debut in the Cup game at Worcester in September 2019, becoming a regular in the matchday squad following the mid-season shutdown.

In March 2021, he signed a new deal with the club following 23 appearances.