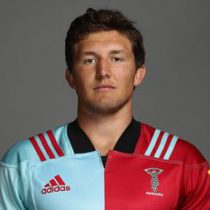 Matthews joined the Harlequins Elite Player Development Group at the age of 15 and split his time in the senior Academy set up by studying a foundation degree in Sports Science and Sports Management at Loughborough University.

At 2.02m he is a giant of a man, able to dominate the line-outs with his superior height and athletic ability. He played for England Under-20 at the IRB Junior World Championships in both 2010 and 2011 having previously turned out for England U18.

Following an impressive 2013/14 campaign, the former Hurstpierpoint College schoolboy was called into England’s XV side to face the Barbarians at Twickenham Stadium in May 2014.

On 5th January 2016, Matthews re signed with the Harlequins.

After appearing 164 times for the Quins since making his debut against Newcastle in 2009, Matthews signed for Wasps in the 2018/19 season, where he featured 13 times.