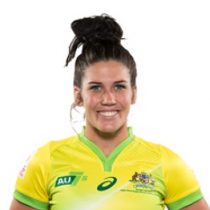 Widely regarded as one of the best players in the world of Women's Rugby Sevens, Charlotte Caslick is the classic modern-day Sevens player – pacy, durable, with a fantastic vision for the game.

Charlotte was named in World Rugby's 2014-15 and 2015-16 Dream Team's - she was also one of four players nominated for the 2015 World Sevens Player of the Year and starred as Australia won the first ever rugby sevens Gold medal in the Summer Olympics in August 2016. The 21 year old scored seven tries throughout the competition in Rio, including one in the Gold medal match against trans-Tasman rivals New Zealand.

Commencing the season in fine form for Bond University during the Aon University Sevens Series, Caslick was yet again a strong performer against her fellow Aussie Sevens teammates during the competition leading the team to an overall second place finishing behind UQ. Caslick was also part of the Aussie Women's squad who finished second at the Oceania Sevens in November.

She was named in the Aussie Women's squad for the 2018 Rugby Sevens World Cup.

In September 2018, Caslick committed to Rugby Australia and the Aussie 7s program for a further two years until the end of 2020.