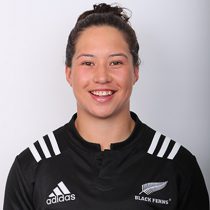 McMenamin has become an integral part of the Black Ferns’ loose forward trio.

The dynamic flanker made her first-class debut for Hawke’s Bay back in 2009, still in her teens, before shifting to Auckland, from where she has racked up over 40 caps and won several national titles.

She was part of every Test in the 2016 campaign as the Black Ferns defended the Laurie O’Reilly Memorial Trophy and overcame England, Canada and Ireland.