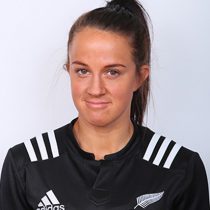 Smith joined the Black Ferns for the first time in 2015 and played at lock in all three International Super Series Tests on her first campaign, scoring a try against the USA.

She then appeared in all five matches in 2016, moving onto the blindside flank after three games at lock.

Smith is a former netballer and North Harbour Sevens representative.

She started in all eight Tests for the Black Ferns in 2017, six of them at lock, and had the distinction of scoring a try in the Women’s Rugby World Cup final against England. She has also made eight appearances for the North Harbour Hibiscus from 2016-17 in the Farah Palmer Cup.

Smith was a regular feature once again in 2018, appearing in the second row for all of the Black Ferns five Tests that year.

In June 2020, Smith announced her retirement from rugby due to medical reasons.