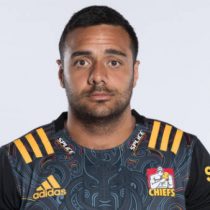 Tiatia was an impact player for the Bay of Plenty Steamers in the 2016 season. The talented full back stamped his mark in his Provincial Rugby debut in 2015, securing himself a contract with the franchise and was renewed for 2017.

Tiatia made his Chiefs debut against the British and Irish Lions when he came on as an early replacement for Toni Pulu.

Despite an outstanding season with Bay of Plenty during the 2017 Mitre 10 Cup Tiatia failed to pick up a Super Rugby contract but did train with the Hurricanes during pre-season.

A player with a really strong left foot kicking game, Tiatia has proven to also be an exceptional counter attacker.

Ahead of the 2020 Super Rugby season, Tiatia has obtained 11 caps and will be looking to add to this total.