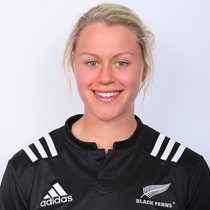 Alley is a multi-skilled allrounder, equally at home in the No 12 or No 10 jersey.

Making her first class debut in 2011 for Auckland while playing for the Waikato University Rugby Club, Alley was a key part of Waikato’s successful return to the Women’s Provincial Championship in 2012 and in 2016 led the North Harbour Hibiscus in the Farah Palmer Cup, becoming the Union's top points scorer.

Strong in contact and with the ability to break the line, Alley has proven herself to be an important Black Ferns squad member since her 2013 debut.

In 2014 she also played one tournament for the Black Ferns Sevens.

In 2017 she appeared in three Black Ferns internationals, starting at second five and scoring a try in the Women’s Rugby World Cup 121-0 demolition of Hong Kong.

She has represented three provinces – Auckland, North Harbour and her native Waikato. For the latter, she made four appearances, mainly in the No 10 jersey, after the Women’s Rugby World Cup last season.

In December 2020, Alley was named as the Black Ferns Player of the Year.

2020 Black Ferns Player of the Year