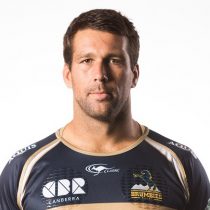 Alcock made his Super Rugby debut in 2010 for the Waratahs in Sydney before going on to play 25 matches with NSW between 2010 and 2012. He scored his maiden Super Rugby try in the Waratahs 41-7 win over the Brumbies in 2011.

Alcock moved from Durban to Sydney with his family at the age of 10. He attended Barker College until 2006. The following year he played seven matches for English club, Oxford Harlequins, scoring five tries.

After returning to Australia, Alcock linked with Gordon, in Sydney’s club Rugby competition and was recognised as the club’s best and fairest Colts player in 2008.

He has spent the vast majority of his professional career in Australia. The stereotypical openside has been terrorising opposition ball while in the colours of both the New South Wales Waratahs and the Western Force.

He made his Super Rugby debut for the Waratahs in 2010 against the Cheetahs. Having spent two seasons as the 'Tahs, Alcock moved on to new pastures the form of Western Force.

Alcock moved to the Western Force in 2013 and played 31 matches for the Perth-based franchise, his final match being against the Brumbies at GIO Stadium in the final round of the 2016 Super Rugby regular season.

September 2016 saw him link with the Brumbies for 2017 after four seasons in the west.

Having represented the Greater Sydney Rams and Perth Spirit in the National Rugby Championship (NRC), he was added to the Brumbies backrow stocks in 2017.

He played 13 of the Brumbies 16 Super Rugby matches and scored 2 tries.

In August 2017 he announced he was leaving the Brumbies to join Japanese side Kamaishi Seawaves.

The South African flanker returned to the Force outfit and was part of the squad to claim first win of new Global Rapid Rugby competition in 2020.