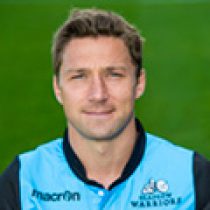 Cusiter made his first start for Scotland in the 2004 Six Nations match against Wales. However, the sharp scrumhalf first shot to international prominence in the 2004 Autumn Internationals, where he made four length-of-the-field breaks in one match versus Australia, a match which Scotland lost 17–31. His crisp passing, unpredictability from behind rucks and mauls, tenacity in defence, and ability to slow up opposition ball by pressurising opposition nines, has made him one of the best in the game.

While Cusiter enjoyed a good run of games in the Scottish national side during 2005, he has since been let down by a string of injuries. In 2005, Cusiter sustained a knee injury against Australia and upon his starting return against Italy in the 2006 Six Nations he picked up a pectoral injury.

In the 2009 Autumn Internationals, Cusiter helped his team beat Fiji 23–10 and was knocked out in a courageous tackle after just 20 minutes into the game against Australia in which Scotland won 9–8.

Having moved to the Sale Sharks for the 2014–15 season after spells with Glasgow Warriors, Border Reivers and Perpignan, Cusiter announced his retirement from professional rugby in May 2016, with the intentions of starting a Scotch whisky business in Los Angeles.

He bowed down with 70 test caps for Scotland between 2004-2014, and six appearances for the British and Irish Lions during their 2005 tour of New Zealand. And was happy to be part of the Scotland side which reached the quarter-finals of the 2007 World Cup in France, that later won the Top 14 title with Perpignan in 2009.