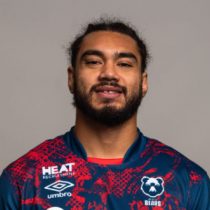 Chris captained New Zealand side North Harbour to the Mitre 10 Championship title in October, before earning his first cap for Samoa against France.

Vui also enjoyed a stint at Auckland Blues featuring in the 2015 Super Rugby campaign, while he represented New Zealand Under 20s in the 2013 World Rugby Championship.

He joined Worcester Warriors in December 2016.

In May 2017, the Samoan international left Worcester Warriors for Bristol Rugby in the summer.

An exciting talent - who can play lock forward or in the back row – earned his first cap during the 2016 November internationals.

Vui became a standout performer for the Warriors since joining on a short-term deal and made the switch to Ashton Gate ahead of the 2017/18 campaign.

He became the youngest captain in World Rugby when he skippered Samoa in 2017, before earning a spot in the Championship team of the season following an impressive debut campaign.

In December 2018 Bristol Bears beat off interest from some of Europe’s biggest clubs to secure the re-signing of Chris Vui until 2022.

The second rower earned a place in the Samoa Squad for the 2019 Pacific Nations Cup with 12 test caps to his name.