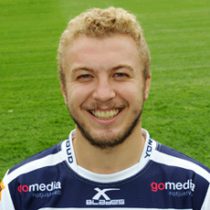 After making his first team debut in the LV= Cup against Llanelli Scarlets in 2010-11, Chris was promoted to the Carnegie first team the following season.

Before establishing his place in the first team, he gained valuable experience through two loans spells, firstly with Otley during the 2009-10 season and the following season he played 11 times for Doncaster.

In May 2017, London Scottish revealed that Chris Walker will re-join the club ahead of the 2017/18 season.

The New Zealander originally joined during the 2014/15 season, which saw the Scots qualify for the semis of the Championship for the first time.

The flanker played for Scots on 35 occasions in the back-row and the former NZ U21 rep had a spell at Doncaster Knights as well as Taranaki in the ITM Cup.

In August 2017, London Scottish revealed Walker as captain of the club, with Irishman Danny Kenny appointed First Team Captain for the 2017/18 season.