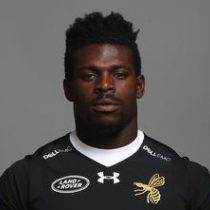 One of the most exciting young players in England, Christian had a brilliant 2011/12 season, when despite missing three months with injury, he finished the season as the second highest try scorer in the Premiership with nine in 15 games. The season ended on a high for Christian with selection for England's tour in South Africa.

Christian had an impressive 2012/13 season. He finished as joint top try scorer alongside teammate Tom Varndell with 13 tries in the Aviva Premiership and made history by being the first player to ever be awarded both the RPA Players' Player of the Year and Young Player of the Year awards.

Christian's additional representative honours include England Sevens, England U16, U18 and he was a key part of the England U20 side which won a Grand Slam 6 Nations title and reached the final of the Junior World Cup, at which he finished joint top try scorer. An impressive C.V. for this talented player.

An injury in a club game at the beginning of December against London Irish meant he played no part in the 2014 RBS Six Nations and the Summer Tour to New Zealand.

On 16 April 2016, Wade equalled the Premiership record by scoring six tries in one match against Worcester.

In October 2018, Wasps' confirmed that Wade had left the club with immediate effect following rumours of the winger making a switch to the NFL.