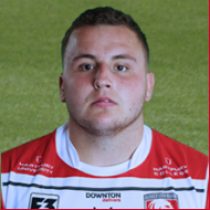 Matson, newly promoted to South-West One for 2016/17, have played a major developmental role in the career of Ciaran Knight, a Gloucester Academy prop, who played at the club from the age of seven to 17.

Ciaran attended Robinswood Junior School and Brockworth Comprehensive, has been studying English, sport, gym instruction and sports coaching at St Peter’s High School and is a new member of Gloucester’s Senior Academy for 2016/17.

Gloucester born, he can play at No.8 as well as on either side of the front row and his best experience was winning the Triangular International Festival as a member of the England Counties U18 squad, under head coach Dave Reed, at Hartpury College last April. It included a 7-5 win over France, which was England’s first victory in matches between the sides for nine years. He also scored a maiden try against France in his third game for England U18 in Cape Town last August.

Knight helped the England Under-20s win the 2017 Six Nations Under 20s Championship[1] Knight also played for them during World Rugby Under 20 Championship in 2017 and 2018, both held in Georgia and France respectively.

Ciaran was named in the England U20 6 Nations squad.

On 14 February 2019, Knight signed his first professional contract to stay with Gloucester, thus promoted to the senior squad from the 2019/20 season.