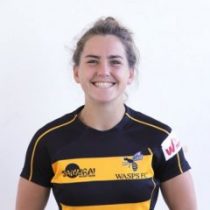 Durham University Economics graduate Claudia Macdonald has enjoyed a meteoric rise through the rugby ranks since first picking up a ball aged 19.

Claudia went on to captain Durham University Women’s Rugby Football Club 1st XV and 1st sevens sides for the season 2017-18, joining Tyrrells Premier 15s side Darlington Mowden Park Sharks to make her debut in September 2017. And while she started in the back line, she now plays at scrum half.

Having moved to Wasps FC Ladies for the 2018-19 season, she was awarded an England EPS agreement in January 2019. Born in Epsom, her family moved to Dubai in 2008 for four years as her father Roger pursued a job there in property development. Whilst in Dubai, her brother Alex represented the Arabian Gulf side. Older brother Seb also played overseas, with Swieqi Overseas Rugby Club in Malta.

A PADI-qualified rescue scuba diver, Claudia completed her studies at St John’s School, Leatherhead, where she played a variety of sports including netball, tennis and hockey.


She came off the bench in all three of England’s 2018 Internationals as well as against Wales in the 2019 Women’s Six Nations.

She enters the 2019 season with five test caps.