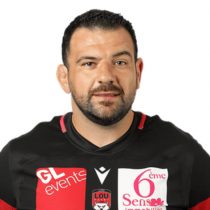 Clement Ric is a front rower who made his professional debut for Clermont in 2008 and has remained at the club ever since helping them to a Top 14 final during the 2016/17 season.

Having made over 100 appearances in the yellow of Clermont, the veteran front rower left the Marcel-Michelin and signed for Lyon.

Although Ric has yet to represent the French test side, he did get the opportunity to tour with French Barbarians squad that faced South Africa A in two-match series in 2007.