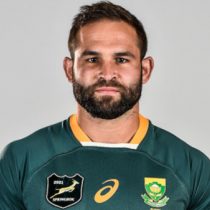 Son of double Springbok, Jaco Reinach who represented the Springboks on the wing and as a sprinter, Cobus inherited his father raw pace which saw him shine as a schoolboy at the Springbok factory that is Grey College.

An exciting scrum-half with raw pace he forced himself into Springbok contention after a great Super Rugby season at the Sharks. Reinach made his test debut during the 2014 Rugby Championship match against Australia in Cape Town.

He got his second taste of international rugby a week later and was again on the winning side as his team earned their first win over the All Blacks since 2011.

In 2015 he was included in the Rugby Championship and RWC wider training squad for the 2015 season. The speedy halfback came agonisingly close to making the Rugby World Cup squad in 2015 but ultimately missed out. He continued to represent the Sharks before in February 2017, and announced that he would be joining Northampton Saints ahead of the 2017/18 English Premiership season.

He earned 60 Super Rugby caps, scoring 10 tries during a successful start to his career with the Sharks. Reinach missed just two games for Saints over his first two Premiership and Champions Cup seasons at the club scoring 16 tries.

His second Premiership season at the club saw him score 12 tries and finish the season as the joint top scorer and earned a recalled to the Springbok squad ahead of the 2019 Rugby Championship, his first appearance back in the squad since 2015. It was a successful return as he scored a try on his first appearance back in Green and Gold as the Springboks won the Rugby Championship and Reinach earned a spot in the Rugby World Cup squad.

He was also nominated for the Premiership player of the season.

After making 70 appearances and scoring 29 tries for Saints, he announced he would leave the side at the end of the 2019/20 season and signed 3 year deal with Top 14 giants Montpellier, he will pair up with RWC winner and halfback partner, Handre Pollard.

Reinach won the Challenge Cup with Montpellier during the 2020/21 season and earning himself a recall to the Springbok squad ahead of the tests against Georgia and the British and Irish Lions.

He enters the tests with 14 test caps and six tries.