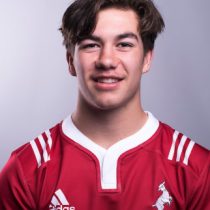 Born in London and brother to Jackson, Garden-Bachop already has strong links to the Highlanders region with his father former All Black Stephen Bachop having played for Otago between 1992-1996

The youngster has already played for Canterbury and Wellington in the Mitre 10 Cup. He played his schoolboy rugby in Wellington for Scots College

He was drafted into the Highlanders 2020 Super Rugby squad and was set to debut in the tournament but suffered a season-ending injury that required surgery on his back.