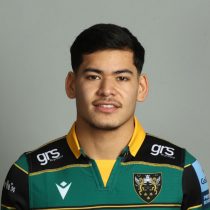 Following his father and former Saintsman Paul Tupai into rugby at a young age, Connor impressed at scrum-half, fly-half and centre during his time in the Saints Junior Academy.

The Northampton School for Boys pupil also starred at school level, helping his team reach the 2016 NatWest Schools Cup Under-18s Vase final at Twickenham, where he claimed the Man-of-the-Match award courtesy of scoring a title-winning drop goal from 30 metres out at just 15-years old.

Making his first senior appearance in Black, Green and Gold against the British Army during the 2018 Mobbs Memorial Match, Tupai then signed his first professional contract with the Club.

Early on the 2019/20 Premiership season, Tupai made 5 appearances off the bench before making his debut off the bench in the Champions Cup against Leinster in December 2019.