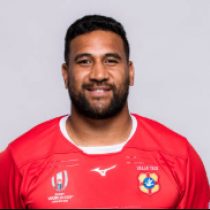 Cooper gained his first cap for the Wallabies against Scotland in Newcastle in 2012, the second Wallaby debutant through the Rebels system.

A serious shoulder injury sustained while playing for his local Club, Endeavour Hills, saw him miss most of 2012, which would have seen the Wallaby winger feature heavily in the Rugby Championships.

Although only his second year, Cooper’s speed, strength and mercurial ball skills have made him a crowd favourite at AAMI Park and many rugby grounds throughout New Zealand.

Cooper’s footballing career began in Auckland, debuting as an 18 year old for the New Zealand Warriors in 2004, before venturing to the Newcastle Knights and cementing his spot in first grade, playing over 50 matches between 2007 and 2010.

The powerful winger switched from rugby league to union in 2011 and can also play in the midfield, having represented Tonga in the Autumn internationals.