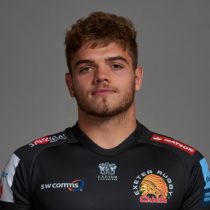 A standout at youth levels, Baldwin has been tipped for a bright future with many dubbing the youngster as Jonathan Davies' long-term replacement.

The high praise that does not come easily and something has delivered on with some standout performances at a young age.

Corey represented the Llandovery College’s 1st XV team and also played for the Scarlets’ U18s where his performances earned him a selection to the Wales U18s Rugby Team that played France in February 2016.

The highly-rated back has come through the Academy pathway with the Welsh region, making a try-scoring debut against the Dragons in the Anglo-Welsh Cup in 2016.

In the same season, Baldwin made his Welsh Under-20s debut, scoring against Scotland in the Six Nations Championship. Equally adept at centre or on the wing, Baldwin – who was born in Camberley, Surrey – is seen as one of the brightest, emerging talents featuring in the Pro14 currently.

In March 2020, Baldwin sealed a move to the Exeter Chiefs for the 2020/21 season with Rob Baxter saying that the addition of Baldwin mirrors that of a similar deal back in 2012 when the Chiefs brought Ian Whitten to Devon from Ulster.

Since then, Whitten has gone on to amass over 200 appearances for the club and has forged himself as an integral member of the Exeter squad.

Baldwin enjoyed a break out season with the Scarlets before signing for the Chiefs taking his appearance tally for the side to 24, including 16 that season. (As of 2 March 2020).

Baldwin is English qualified having been born in Surrey.