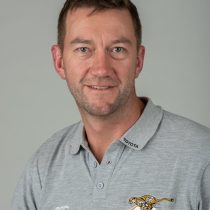 Born in Nelspruit, Corniel van Zyl went on to represent the Pumas at Currie Cup level with his playing journey taking him to Italy before he moved into coaching after his retirement.

Van Zyl made over 20 appearances for the side before going on loan to the Rotherham Titans in England. He returned to South Africa to take up a contract with the Cheetahs in 2005.

He would go on to make 48 appearances in the Currie Cup for the side as turning out for the Cheetahs before he moved to Italy to sign for Benetton in 2007.

The move to Italian would see van Zyl make his first steps towards test rugby. While at Benetton van Zyl represented Italy A before he gatecrashed the 2011 Italy World Cup squad after being one of two uncapped players named in the party going to New Zealand.

He played in four of Italy's World Cup matches starting three times for the side and would earn another four caps for Italy with the last of which coming in 2012 against Wales.

Van Zyl would retire from professional rugby in 2015 playing the last of his 160 matches for Benetton before retiring for one final stint with the Cheetahs.

He moved into coaching the Cheetahs following his retirement and has worked alongside the likes of Franco Smith, Rory Duncan and Hawies Fourie at the side.