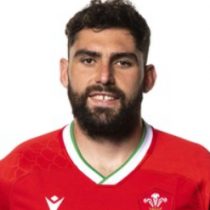 Hill represented his home town of Pontypridd throughout all age grades until the under 15 level. He made his first start for the club in April 2010 in a game against Llanelli and scored two tries on his debut.

In April 2012 he was selected as captain of the Wales Under-20 squad for the Junior World Cup in South Africa.

The lock made his debut for the Men of Gwent against London Wasps in the LV=Cup at Rodney Parade. The Wales lock has represented on 3 occasions as he was named in their 2017 6 Nations squad.

In May 2017, Hill was included in the Wales squad for the two-Test summer tour.

In June 2017, Hill was called up into the British & Irish Lions squad as a shock inclusion following Wales' summer tour, where he finished the tournament with 10 total caps to his name.

Having played 85 times for the Dragons since joining in 2013 & scoring 11 tries, the club's captain was handed a new two-year contract to extend his stay with the region until 2020.

Hill was named in Wales' RWC squad after helping Wales secure a Six Nations Grand Slam but failed to recover from injury and was sent home having not played a single game at the World Cup.

Later in 2020, Hill made the switch to the Cardiff Blues. The 25 test cap second-row came through the pathway at the Blues and made 16 first-team appearances before switching to the Dragons via a short stint at Moseley.

He made 110 appearances during seven years at Rodney Parade, captaining the region during the last three seasons and has established himself on the international stage.