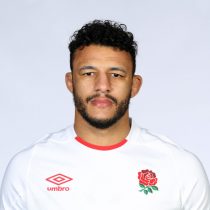 The versatile Lawes, who usually plays at lock, but can also player flanker, is one the most physically imposing forwards in world rugby and is of the best tacklers about. After reaching the Junior World Championship final with England under-20s in 2009 Lawes’ impressive form for his local club, Northampton Saints, awarded him Senior international recognition on 14 occasions, firstly in a November 2009 test against Australia.

Lawes only began rugby in earnest at sixteen years of age and was part of England’s 2009 U20 Junior World Championship final reaching team. A little over a year later, Lawes was named 2010 Investec Man of the Series for his dominant performances for England, in which he started all four games.

A European Challenge Cup winner with Saints in 2009/2014; Champions Cup finalist against Leinster in 2011; Premiership finalist in 2013 and winner against Saracens in 2014. Lawes has established himself in the England setup and with his club Northampton. He was a main player in Northampton's title-winning campaign in 2013/14 season. The lock sealed a spot in the English 2015 RWC squad.

In October 2016, he was named in the 32-man England squad for the Autumn Internationals. Lawes started in the opening game of the Autumn Series against South Africa. Celebrating his 50th cap on the day, Lawes put in a huge shift, England's second top tackler for the game, he capped off the performance with a try in the victory.

Lawes helped England claim back-to-back Grand Slam triumphs and was named in the 2017 British and Irish Lions squad for the tour of New Zealand, where he made two Test appearances. In October 2018, the second rower signed a new deal with Saints that will see him remain at the club until the end of the 2020/21 season.

Lawes was selected in the England squad for the 2019 Rugby World Cup and played a pivotal role in England's surge to the final, in his third World Cup. He started 4 of England's Rugby World Cup matches, including the final, made two appearances from the bench and took his test cap tally to 83.

As of March 2021, the hard-hitting forward's test caps include 11 RWC caps, 35 Six Nations Caps and Two Lions caps. He also has well over 200 caps for the Saints, including over 60 European caps.

Lawes took his test tally to 89 during the 2021 Six Nations before an injury cut his tournament short.

In May 2021, Warren Gatland named Lawes in the British & Irish Lions squad to take on the Springboks that same year.

Lawes captained England during their three-test series in Australia in 2022 and earned his 95th test cap for England in the second test taking him to 100 test caps overall, including five for the Lions.