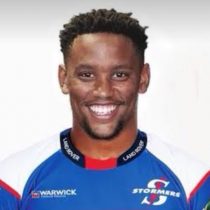 While attending Paul Roos Gymnasium in Stellenbosch, the talented and extremely skillful fullback represented Western Province at youth level and was selected in the South African Schoolboys side two years in a row in 2009 & 2010.

After leaving school, Barry went on to represent Maties in the Varsity Cup in his first year at the university.

He quickly became a regular in the side and was named in the South Africa U20s squad for the 2011 Junior World Championship.

In 2013 he returned to Maties and represented in the University while playing for Western Province in the Vodacom Cup.

He failed to make another Western Province side until 2017 when he was given a second crack at professional rugby career after 4 stellar years worth of performances in the Varsity Cup.

He made 5 appearances for the Cheetahs in the Pro14 scoring 3 tries, before joining the Stormers training squad ahead of the 2018 Super Rugby season.

Barry returned to the Cheetahs days after rejoining the Stormers again going on loan to the Pro 14 side until the end of May.

Upon his return to Cape Town he went on to represented the Stormers in 10 Super Rugby matches, and also captained Western Province in the 2019 SuperSport Rugby Challenge.

In July 2019, he signed a new three-year deal with the Cheetahs.