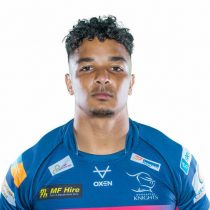 The former England Under 18 winger began his pro career at Yorkshire Carnegie making his first-team debut in the 2011/12 season and went on to score eight tries in 18 appearances for the Tykes before a spell on loan with Rotherham Titans.

Wilson was an instant hit at Clifton Lane and made his move permanent under the tutelage of Lee Blackett ahead of the 2013/14 campaign.

The speedster made 55 appearances over a three-year spell with the Titans scoring 24 tries in the process.

The Sheffield local spent the 2016/17 campaign at Vallis Way with Ealing Trailfinders and finished the season as the club’s leading try-scorer with 11 tries in all competition including in the Trailfinders play-off semi-final victory at Headingley.

Wilson joined the Knights in September 2017 having spent the early part of the season with Sheffield Tigers after a short stint with Championship Rugby League side Sheffield Eagles.

In August 2020, the former England Under-18 signed a deal with Nottingham.