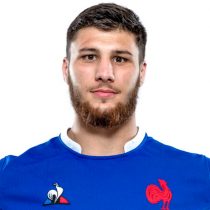 Cyril Cazeaux began his rugby career with club side Saint-Paul, whose president at that time was his father.

After his youth levels, he moved to US Dax in 2013 and was promoted to the senior side a year later where he made his professional debut in PROD2.

After the relegation of US Dax in 2015, Cazeaux signed an Academy contract with Union Bordeaux Bègles after making 9 appearances for the club.

In 2017, he signed his first professional contract with Bordeaux with his deal seeing him stay at UBB until the end of the 2018/19 season.

He continued to shine for the club making over 100 appearances and signed a deal to remain at the club until 2023.

In January 2020, he was named in France's Six Nations squad where he will look to make his test debut.