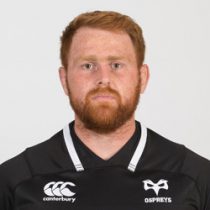 Baker came through the regional development pathway, with Ystradgynlais, his home club, from where he entered the Ospreys age-grade system, going on to play almost 50 times for Swansea.

A Wales age-grade cap, Baker featured in the 9-6 win over New Zealand U20 in the 2012 Junior World Championships as the Welsh youngsters progressed to the semi-final, his first senior cap coming a year later.

In May 2013 Baker was selected in the Wales national rugby union team 32-man training squad for the summer 2013 tour to Japan. He made his international debut against Japan on 8 June 2013.

Baker was then selected for the initial 47-man training squad by Wales for the Rugby World Cup 2015.

He was awarded his Ospreys cap in early 2016 following his 50th regional appearance, which came in the Champions Cup tie versus Exeter Chiefs in January.

After 64 appearances for the Ospreys with 13 tries to his name, the ball carrying number eight extended his stay at Liberty Stadium until 2019.

In October, 2017 Baker shattered a knee while playing against Clermont Auvergne in the Champions Cup.

He was ruled out for almost 700 days before making his return in September 2019.