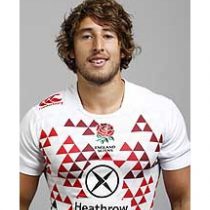 Bibby signed full-time for England Sevens earlier in the summer of 2012 when he also swooped for two tries as European champions England retained their Moscow title by defeating France 21-15 in the final. Having Studied in Kirkham Grammar School, Lancashire, Bibby was player of the tournament for Sale Sharks in the JP Morgan Asset Management Sevens at Edgeley Park in July 2011.

In the full 15-a-side game he appeared for Fylde twice at fly half in 2008-09 and five times in 2009-10, as well as for England Students. His massive point contribution allowed him become the 11th highest scorer overall with 101 points, including 11 tries after five events in the 2013-14 IRB World Series.

He was selected as part of the squad that represented Great Britain at the 2016 Summer Olympics in Rio.