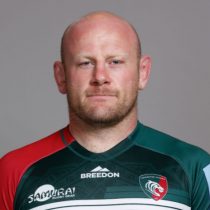 The home grown Leicester Tigers tighthead has established himself as the first-choice No.3 in England. Learning his trade from Martin Castrogiovanni and competing for a Tigers spot with the big Italian has lifted Cole's game to new heights.

Named Tigers Players’ Young Player of the Season 2009/10 and a man with a big future when you consider how young he is for a world class front row forward. Cole is particularly strong in the set-pieces and has been a regular in the England side since making a big impression for his country in 2010.

His perpetually strong performances for both club and country led to his selection in the 2013 British and Irish Lions touring party.

The destructive nature of his play saw Cole selected on the bench for the first two tests of the series, before being given the starting tighthead berth for the final test, which the Lions won emphatically to secure the series.

Cole's impeccable form for England has secured the loosehead a spot in England's squad ahead of the 2015 RWC, where he will look to add to his current 51 caps.

Cole was included in new coach Eddie Jones's 31 man squad for the 2016 Six Nations, he was a central part of England Grand Slam winning side scoring a try in the final game against France.

Cole was included in the 2016 England Rugby Tour of Australia, he started in all three tests in Australia. Cole scored a try in the final test against Australia in which England whitewashed the Wallabies for the first time. a

Cole was named in the British & Irish Lions squad for the 2017 tour of New Zealand. A second tour for the tighthead prop who made 9 appearances on the 2013 tour (3 test).

In November 2017, Cole agreed a new contract at Leicester Tigers. The academy graduate, given his senior debut for his hometown club in October 2007 and has now made over 185 appearances in the front row as well as playing in 75 Tests for England and gaining selection on two tours with the British & Irish Lions.

Cole has been selected in England's 2019 6 Nations squad where he will look to add to his 82 Test caps, having missed the June and November Internationals. He has had 42 previous 6 Nations appearances scoring 25 points.

The experienced prop helped England reach the Rugby World Cup Final in Japan and came off the bench in first half in the loss to the Springboks.