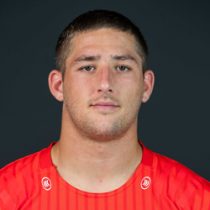 A product of the Greencore Munster Academy. Goggin previously represented the province at U20 level and made his debut for Munster A in the B&I Cup against Plymouth Albion in December 2013.

Dan attended St Munchin's College and represented the school in the Munster Schools Rugby Senior Cup before joining Young Munster. Since leaving school, Goggin has represented Ireland at u20 level as well as the sevens side.He featured in the Ireland U20 squad for the 2014 Junior World Championship, starting every pool game and secured a fourth-place finish.

He represented the Ireland Wolfhounds' Sevens team in the summer of 2015 and joined the Ireland Men's 7s bid for Olympic qualification in 2016. He featured in Munster's 2016/17 pre-season campaign and made his first senior start against Worcester Warriors at Irish Independent Park with his first PRO12 appearance came a week later as he started the game away to Scarlets.

The 2016/17 season proved to be breakthrough one for the centre which saw him make a total of 14 senior appearances, including Munster’s historic win over the Maori All Blacks in November. He also played a significant role in Munster A's 2016/17 B&I Cup title-winning campaign.

His form saw him step up from the Academy to a Development contract with Munster after three years in the Academy in June 2017. Injuries rocked his second season with the senior side as he sustained a knee injury in the opening game of the 2017/18 season against Treviso that kept him out of action until February with the centre returning in the victory over Zebre at Thomond Park.

Despite his injury, Goggins' promise was recognised by the Province as he signed a two-year deal with the side that will keep him at the province until June 2020.

He scored his first Munster try against the Southern Kings in April 2018 and made a superb start to the 2018/19 campaign making his Champions Cup debut in the opening clash away to Exeter Chiefs in October. He was named as the Province;s Young Player of the Year after an excellent 2018/19 season.

Goggin has continually impressed since his debut for Munster and was once again rewarded with a two-year contract extension that will see him remain with the province until at least June 2022.

The talented centre has made 58 appearances for Munster since his debut and has scored 8 tries for the side.

Munster's Young Player of the Year 2019