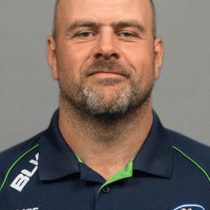 Born in Oxfordshire, England, Dan McFarland is a former Emerging Ireland, Ireland Wolfhounds and Ireland U20 coach made over 100 appearances for Connacht from 2000 to 2006, and also played for Richmond and Stade Francais.

In 2007, McFarland linked up with Eric Elwood to guide the Ireland Under-20s to a grand slam of victories in the Six Nations Championship.

McFarland's transition from player to coach continued at Connacht, becoming Assistant Coach in 2010. He went on to be Assistant Coach for Glasgow Warriors, who won the PRO12 Championship for the first time during his first season as second in command, before moving to BT Murrayfield in 2017.

Gregor Townsend recruited Dan McFarland to Glasgow as Forwards Coach in the summer of 2016 after nine seasons with Connacht. McFarland joined Head Coach Gregor Townsend and Assistant Coach Matt Taylor in their move from Glasgow Warriors to the Scotland national team ahead of the 2017 summer tour.

His international coaching experience extended to stints with the Emerging Ireland tours and the Ireland Wolfhounds.

In April 2018, Ulster Rugby revealed that McFarland will take over the province as Head Coach during the 2018-19 season on a three-year contract.