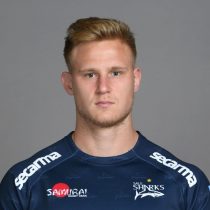 In 2014, he was included in the South Africa Under-20 squad that played at the 2014 IRB Junior World Championship in New Zealand.

Du Preez made his provincial first class debut in 2015, In May 2016, he signed a three-year contract extension with the Sharks.

He has represented the Sharks in Currie Cup and Super Rugby.

Ahead of the 2017 Super Rugby season, du Preez has made 13 Super Rugby appearances scoring 2 tries.

He made his test debut off the bench against France and in doing so creating his own bit of history.

His debut came almost a year after his twin brother Jean-Luc and this was also the first time in the history of South African rugby that two sons of a Springbok have played Test rugby.

At the end of the 2019 Super Rugby season, du Preez had taken his Super Rugby cap tally past 50 with the Sharks confirming that the looseforward would join his brothers Robert and Jean-Luc at Sale Sharks on a permanent deal despite originally signing loan deal in May.