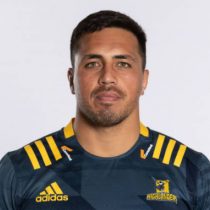 Born and raised in Christchurch along with younger brother Anton who would go on to become an All Black, Daniel attended Christchurch Boys' High School and played for the school´s first XV rugby team.

Lienert-Brown was a member of the New Zealand Under 20 team that participated in the 2013 IRB Junior World Championship in France .

His next step was to become a member of the Crusaders Knights development team in 2014 while at the same time turning out for High School Old Boys in Canterbury's local club rugby competition.

He became a member of the Crusaders Knights development team in 2014 and received a call-up to the senior Crusaders side.

Lienert-Brown joined the Highlanders in 2015 and has since made 28 appearances scoring 2 tries in Super Rugby.

A full squad member for 2016, he featured in 14 games and scored 2 tries as the men from Dunedin were eliminated by the Lions at the semi-final stage.

Lienert-Brown played in all but one of the Highlanders Super Rugby matches taking his personal tally to 43 Super Rugby caps and 3 tries.

He also started in the Highlanders historic victory over the British and Irish Lions.

He was named in the Canterbury Mitre 10 Cup squad but sustained a neck injury in the opening round and was ruled out for the remainder of the season.

He has turned into a more mature, skillful prop who will look to build upon the good performance of last season that saw him take part in all 14 Super Rugby games for the Highlanders in 2019.

Ahead of the 2020 Super Rugby season, Lienert-Brown was again selected for the Highlanders squad. He has obtained 74 caps.