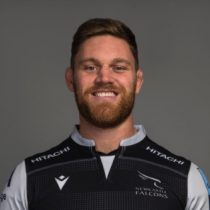 Barry moved to Worcester Warriors from Cornish Pirates in the summer of 2015 and proved to be a real asset to the side at Sixways, having previously captained Filton College to the National Schools' Rugby Festival and also enjoyed a loan spell at Clifton.

Before his move to Cornish Pirates Barry made 60 appearances for Bristol Rugby in all competitions, including the Aviva A League.

The lock made 19 appearances during the 2015/16 season and became a key component in the lineout. He was named True Warrior of the Year by the Supporters’ Club and also extended his contract at the end of the year.

During his second season at Sixways, Barry found himself competing against Will Spencer for a place in the starting line-up but still managed to rack up 18 appearances in all competitions.

In April 2019, he signed for Newcastle Falcons. He made 20 first-team appearances for Newcastle before leaving the club in April 2021 to join French club Vannes.