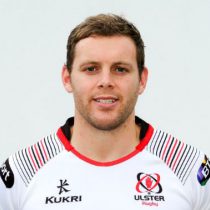 Cave is extremely physical, combining sheer pace with strength and fine footballing skills. Cave signed his first full Ulster contract at the beginning of the 2008/2009 season.

Cave was part of Ireland’s under 20’s grand slam winning team of 2007 and has also represented Ireland at 7’s.

Impressive form at the back end of the 2011/2012 season saw Cave selected for Ireland’s test squad for the tour of New Zealand. He was included in Ireland's extended 2009 RBS 6 Nations squad and won his first international cap against Canada in May 2009.

In 2010/11 he struggled with injuries but returned towards the end of the season and scored some vital tries as Ulster reached the quarter-finals of the Heineken Cup and semi-finals of the Magners League.

Cave showed excellent form on his return to action but picked up another injury in early 2012, just as he looked likely to be included in Ireland's Six Nations squad. He made another magnificent comeback as Ulster made the Heineken Cup final for just the second time in their history.

His form was recognised with an international call up for the summer tour to New Zealand in June 2012.

However, the Ulster man was rewarded for an excellent 2015 season when he was selected in Ireland's 2015 Rugby World Cup squad.

The Ulster centre committed to the club until 2018, having signed a new three-year deal with the Irish province.

Cave equalled Andrew Trimble's tally as the most capped Ulster player of all time racking up 229 appearances scoring 45 tries before announcing that he would retire at the end of the 2018/19 season.

At the 2019 Irish Rugby Players Awards, he received the Medal for Excellence which recognises on-field effort combined with off-field commitment to the game.