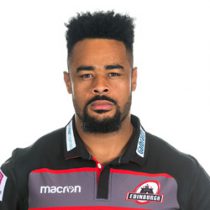 The young front ranker is a a player with huge potential and cut his teeth at the Harlequins academy. He began his career at Battersea Ironside RFC and has also played for Surrey at a variety of age-group levels. Marfo has only a handful of senior appearances for Quins, but is developing nicely into a big strong prop forward.

Having played for Harlequins and struggled to break into the first team ahead of England loosehead Joe Marler and club stalwart Mark Lambert, the born-and-bred Londoner stepped down to the Championship for the 2015/16 season.

In June 2017, Marfo joined Edinburgh Rugby from English Premiership side Bath on a one-year deal.

The loosehead, 26, made three appearances for Bath since joining the club in January of 2017 having previously plied his trade at London Welsh and Harlequins.

In October 2017, he became one of ten uncapped players to be included in Scotland's 36-man squad for the November Internationals.