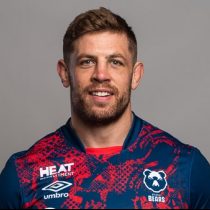 Born in Bristol, England, Attwood is a towering lock whose dynamism around the park is not to be undervalued.

A key man in any side's lineout standing at over 2m tall, Attwood adds considerable bulk to the tight five.

Educated at The Ridings High School and later the University of Bristol, he began his professional career at Bristol before moving on to represent West Country rivals Gloucester and Bath.

His lineout prowess and athleticism around the field saw him become a widely respected member of the Bath Rugby squad as he made his 100th appearance in the Blue, Black and White in January 2015 against Wasps.

Attwood made his international debut for England in 2010 having previously played for both the Under-20s and Saxons sides.

He went on to make 24 appearances for the England senior team, and was selected in the wider squad for the 2015 Rugby World Cup.

During the 2017/18 season, Attwood joined Toulon on a short-term deal before returning to Bath for the 2018/19 season.

2019 saw him sign a two-year deal with Bristol Bears.