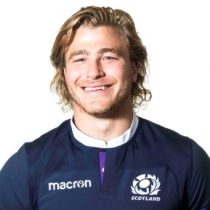 Born in Zimbabwe, Denton moved to Scotland as a student and played for Edinburgh Academicals before joining the national academy and was awarded a professional contract at Edinburgh in 2010/11. He played for Scotland Under-20s and Sevens before making his senior Test debut.

Denton’s first Scotland start came in style, winning the man of the match award against England in 2012 Six Nations. Denton attended secondary school in Kingswood college in South Africa before moving to Edinburgh to study economics at Edinburgh University.

The hard running flanker has also represented Scotland at 7’s level, as was part of Scotland’s Dubai and George tournament squads, and was one of the Scotland team that lifted the Bowl in the 2011 Emirates Airlines South Africa 7’s. To date, Denton has won 32 Scotland caps. He moved to Bath shortly after the commencement of the 2015/16 season where he has made 4 appearances for the team.

Denton has been named as part of the Scottish squad for the upcoming Six Nations Championship in 2016.

The Scottish international joined Bath in 2015 and has gone on to make 23 appearances in the Blue, Black and White, with a hamstring injury restricting his game time for much of the 2016/17 season.

In May 2017, Denton left Bath Rugby this summer to join Worcester Warriors.

In February 2018, Denton announced that he will leave Worcester to join Leicester Tiger in the Premiership at the end of the season, he has won 30 caps for Scotland since his debut in 2011.

In September 2019, Denton announced his retirement from rugby following a concussion injury.