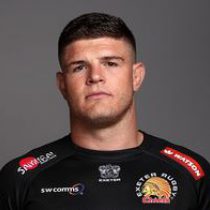 Born in the Zimbabwean capital of Harare, Ewers is a powerful ball carrying back-row forward who plays primarily at the back of the scrum at number 8.

A destructive ball carrying, and exceptional defensive capabilities, Ewers graduated from Ivybridge Community College and was signed up with Exeter Chiefs in the summer of 2010.

His debut came later that year in the British and Irish Cup against Newport. Ewers was selected for the England squad to face the Barbarians in the summer of 2014. In February 2016 he was called up to England's 2016 Six Nations squad.

Widely regarded as one of the most formidable forwards playing in English rugby’s top flight, Ewers helped Exeter Chiefs win the 2016/17 Premiership title and has continued to be a vital cog in the Exeter pack.

Since making his debut in a memorable British & Irish Cup fixture away to Newport, Ewers - a key component of the much-talked-about Chiefs pack of forwards - has since gone on to feature in 161 first-team games, scoring 19 tries in the process.

In April 2020, he extended his stay at Exeter Chiefs.