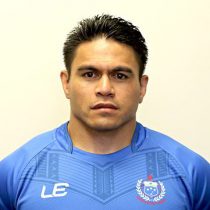 Born in Apia, Samoa, Lemi is one of the game's most electric wingers. Diminutive in stature, Lemi is feared by opposing defenders for his blistering pace and dazzling footwork.

His professional career began at Bristol where he became a fan favourite scoring over 230 points in four years. Two years at London Wasps then followed before linking up with Glasgow Warriors in 2011.

After a solitary year in Scotland, Lemi returned to the English premiership with Worcester Warriors. Lemi has been a key member of the Samoan national side ever since his debut in 2004.

David Lemi made his long-awaited return to Bristol in the summer of 2014. One of the most popular players to represent the Club in the modern era, Lemi rejoined from Worcester Warriors.

In his first spell with Bristol, the prolific winger made eighty-eight appearances over four seasons, racking up 248 points in the process. Lemi has earned over forty caps for Samoa, representing his country at the 2007 and 2011 Rugby World Cups.

In 2016, Lemi led Bristol back to the Premiership as captain before leaving the club in 2018.