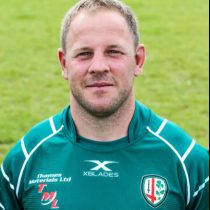 Born in Darwin, Australia, David started his rugby career with Brisbane’s Souths Club at under-14 level, before travelling to England on a gap year after finishing his school studies.

English eligible via the British passport he obtained due to his mother being born in Scotland, made his England debut in 2008 as a replacement for Lee Mears against New Zealand.

He decided to stay in England and soon joined Irish’s Academy in 2003 and rose through the ranks to become a stalwart of the club.

The resurgence of London Irish since 2008 has coincided with the emergence of hooker David Paice, and many Irish fans claim that it is no coincidence.

Paice was an instrumental part of the London Irish team that reached the 2008 Heineken Cup semi final.

In August 2016, he was named London Irish's vice captain alongside teammate Topsy Ojo for the club's 2016/17 season.

Ahead of his 250th appearance for the club, the hooker signed a 2-year contract extension in October 2016.

Paice led Irish to promotion back to the Premiership during the 2016/17 Championship winning season. David made his 250th appearance for Irish that season, further underlining his loyalty to the club.