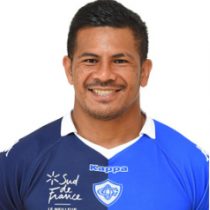 A Samoan speedster with one of the deadliest steps in the game, David Smith was named as one of the Hurricanes draft picks for the 2007 Super 14 season, and by its conclusion, he had accumulated 12 caps as well as scoring his first try against the Stormers.

In 2008, he was signed by the Blues but returned to the Hurricanes a year later. He also earned a cap for the All Black Sevens in 2008 which tied him to New Zealand.

Smith's next venture took him to Australia with the Perth-based side the Western Force who he signed for the 2011 Super Rugby season.

During his time in the Southern Hemisphere competition, he made 56 appearances scoring 19 tries.

Smith also played for Taranaki, Wellington and Auckland during his time in New Zealand scoring 20 tries in 56 games in the NPC.

The pocket rocket outside back left for France in 2011 signing for French giants Toulon.

His stint with Toulon came to an end in 2015 after making 99 appearances scoring 38 tries.

Smith was a regular for Castres throughout his tenure at the club before the club opted not to renew his contract after the 2018/19 season.

In July 2019, Smith prolonged his career in France after signing a deal with Narbonne.