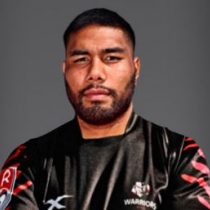 Tameilau is a dynamic, ball carrying loose-forward. Rugby is in his blood as his father, Moses Similai, was both a player and coach along with his two brothers.

He started his career with Peninsula Green High School Rugby in California. He then played for the Bay and Northern California All Stars as well as the USA at under-18, 19 and 20 levels.

After a spell in American Football, he returned to rugby with San Francisco Golden Gate.

David was awarded a scholarship by USA Rugby to play for Taranaki Rugby Academy in New Zealand in 2015.

His full international debut came against Canada during the inaugural Americas Rugby Championship in 2016.

Tameilau has represented the USA 11 times, scoring two tries and was called up to the Men’s Eagles squad for their 2018 June Test Series.

He has previously played for San Francisco Rush in the American PRO Rugby competition and also had spells with Newcastle Falcons in the Premiership and Mitre 10 Cup side Taranaki.

In May 2018, Glasgow Warriors announced the signing of David on a two-year deal from Utah Warriors, subject to visa and medical.

In November 2019, Tameilau was released by Glasgow Warriors. Following this, he was signed by San Diego Legion on 12 November 2019.