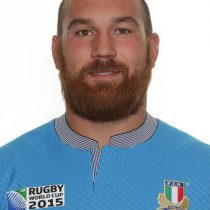 Davide Giazzon's preferred position is at Hooker, although he can also play at Prop. He currently plays for Treviso in the Rabodirect Pro 12 and the Heineken Cup, having previously represented Zebre. He gained his first international cap in 2012 against Argentina as a sub, having previously played for Italy A and the Italian U-21 team. International recognition came in 2012, making his debut against Argentina as a sub. Since then he has been in and out of the Italy set up, but will represent his country at the 2015 Rugby World Cup.