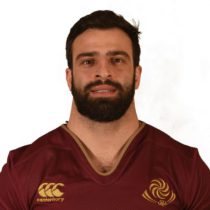 Born in Tbilisi, Davit is a Georgian centre who has become a stalwart to the game with over a century of caps for his country.

He played for Bastia, Nice, from 2009/10 to 2011/12, for Stade Rodez Aveyronin the Fédérale 1 in France, during the 2012/13 season, and currently plays for Yenisey-STM Krasnoyarsk in the Russian Championship.

Ahead of the 2017 November Internationals, Davit has won 103 caps for Los Lelos.