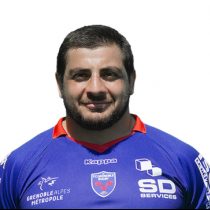 After arriving in France from Georgia to play for Massy, aged 21 Kubriashvili moved up the leagues to the Top 14 with Montpellier.

In May 2013, he played as a replacement as Toulon won the 2013 Heineken Cup Final by 16–15 against Clermont Auvergne.

He joined Stade Francais in 2015, returning to MHR as a medical joker. He has played 38 times for Georgia and is contracted to Montpellier until 2018.

Following the conclusion of his contract with Montpellier, he signed a deal to join recently promoted side Grenoble ahead of the 2018/19 Top 14 season.