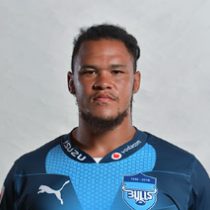 Having grown up in Wellington in the Western Cape province in South Africa, Van der Westhuizen was selected to represent Border at the annual Under-16 Grant Khomo Week competition held in Upington, where he scored a try in their match against the Puma.

In 2011, he moved to Gauteng where he represented Pretoria-based side the Blue Bulls in the Under-18 Craven Week competitions in 2011 and 2012 and remained with the club even after finishing high school.

In 2014, Van der Westhuizen was included in the South Africa Under-20 squad that participated in the 2014 IRB Junior World Championship held in New Zealand. He played off the bench in their opening match against Scotland before making his first start for the Under-20s in a 33–24 victory against hosts and four-time winners New Zealand.

In 2015, he was included in the Bulls' squad for the 2015 Super Rugby season and was named on the bench for the side's season opener against the Stormers.