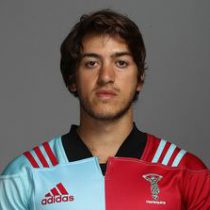 Catrakilis attended St John's College in Johannesburg where he played for the first team as a 15-year-old and went on to captain the first team in his final school year and played age group rugby for the Lions. He a brief part of the European season following school with the Racing 92 Under 23 side before returning home.

He went on to join False Bay Rugby in Cape Town playing in the Super A League before making the move to UCT to play Varsity Cup. In his first season for the Ikey Tigers he lead them to the Varsity Cup title and was leading points scorer that season.